Skip to content
Cart
Now reading: The Roaring Twenties are Back: the Impact of 100 Year Old Trends
Share
PrevNext 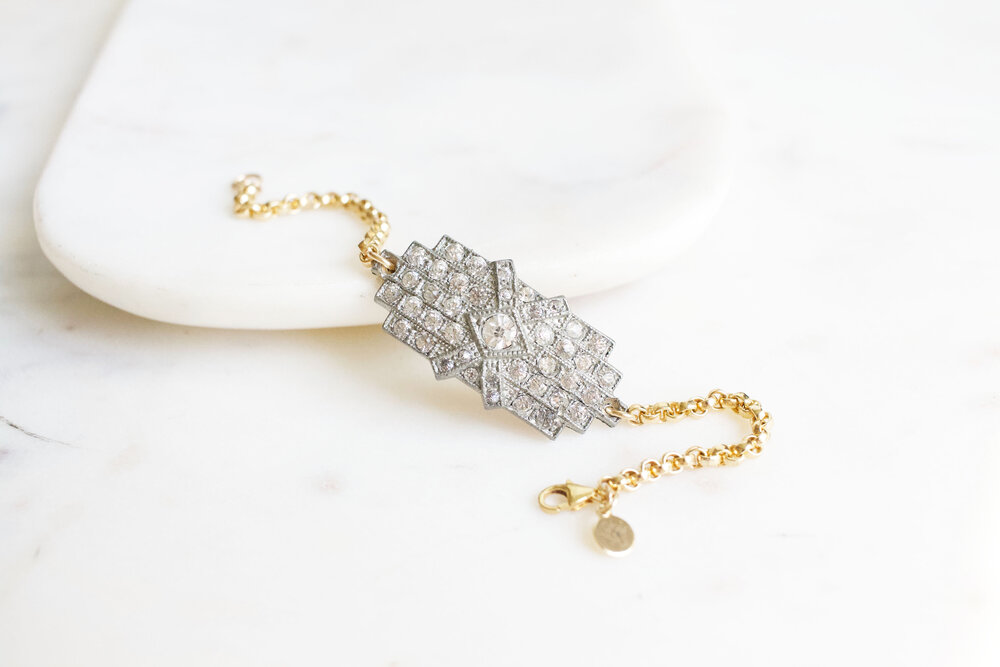 Art Deco is a design term that was coined in the late 1910s to define the style of the new generation. Art Deco would hold popularity through the 1920s and would come to a close with the beginning of World War II. One hundred years later, these styles have come back to wow us again. The Art Deco movement was primarily influenced by Cubism and the jazz age. In its early days, Art Deco presented bold, bright, and sometimes clashing colors--a direct contrast to the subdued styles of the Victorian era. Over time, Art Deco focused on form and shape more than color and used stark blacks and whites to emphasize the hardline silhouettes. After the first world war, society was changing for the modern female, allowing her to vote and have a career of her own. Designers began to recognize the danger and inconvenience that huge dresses and hats with tons of fabric posed to the modern female.This began to shift dress styles towards simple shapes, moving away from small waists and accentuated hips and busts and more towards column dresses that removed curves altogether and provided more mobility and freedom. Jewelry began to mimic and dramatize this geometric shape, accenting the flat, linear figure with styles like: layered necklaces that drape down to the waist and earrings that were long and flowy. The element of movement was paramount in feminine fashion of the 1920s. The 1920s saw great economic prosperity, giving it the nickname The Roaring Twenties. This allowed designers like Cartier to flourish with exquisite designs featuring extravagant elements like platinum, excessive diamonds, and more colorful and unique jewels. Emeralds, sapphires, and garnets became widely popular as they beautifully contrasted the diamonds and rhinestones which became a staple in Art Deco pieces because of the increase in manufacturing abilities. We can see this trend coming full circle today through Cartier: The jewelry designs of the Art Deco era were a direct reflection of the wealth and prosperity of the time. As new buildings and emblems of wealth adorned with contemporary geometric art began to present themselves in society, women began to affirm their own advancements through style. In current day, women are challenging gender restraints once again. Art Deco has always been a symbol of modernity and prosperity, which is why it’s not hard to spot Art Deco’s influence on more gender fluid jewelry trends today. It's all in the details... even down to the rhinestones