Our Maccabee Fraternal Locket Necklace has an alluring history of sisterhood and secrecy. The locket features a bee hive with the letters “L.O.T.M” above it. These letters stand for a women’s fraternity by the name of Ladies of the Maccabees.

Ladies of the Maccabees are a branch of  Knights of the Maccabees who were originally founded in 1878 in London, Ontario, Canada, and later established in Michigan in 1884. Knights of the Maccabees were founded upon the principles of ancient Maccabees, a group of ancient Jewish warriors who were the first recorded in history to create a common treasury, much like modern day insurance companies. A lot of fraternities at this time functioned this way and were known as “legal reserve” or “benefit” societies. Ladies of the Maccabees were the first of these legal reserve societies to be led exclusively by/for the benefit of women in the late 1800s. In 1892, Bina Mae West, a former school teacher in Port Huron, founded the organization after witnessing a students’ family torn apart and taken out of school because their mother passed and had no form of insurance.

The outer ring of the logo features the motto of LOTM: latin phrase “Ad Astra Per Aspera”. According to a passage from their book of rituals, published in 1899: “We are a vast sisterhood of women, bound together by the sacredness of our obligation, for mutual benefit, and the uplifting and upbuilding of our sex; for mental, moral and spiritual growth; and for a cultivation of the divine attributes of charity and love, which is the foundation of the happiness of the world. Our motto: ‘Ad Astra Per Aspera,’ meaning ‘To The Stars Through Difficulties,’ is our inspiration and our guide.”

At the top of the logo, you’ll find a cross in side of a crown. According to the book of rituals, this comes from one of their banners. The cross represents the trials and burdens of life while the crown symbolizes: “the victory awaiting us at the end, if through it all, we ‘bear and forbear,’ remembering that temptations are many, that all are weak, and that none are free from faults.”

At the bottom of the logo, you’ll find the letters “T.L.F.P.B.” these are from another banner of the hive and stand for “Truth, Love, Fraternity, Progression and Benevolence.” According to their rituals the bearer of this banner reminds the hive: “Our order is educational and elevating; tending to develop woman’s best thoughts; to protect her from the evils of the world, and to sustain her in the dark hour of sorrow, which sooner of later overshadows all.”

In short, this necklace is the embodiment of a commitment to the protection and betterment the fellow woman. 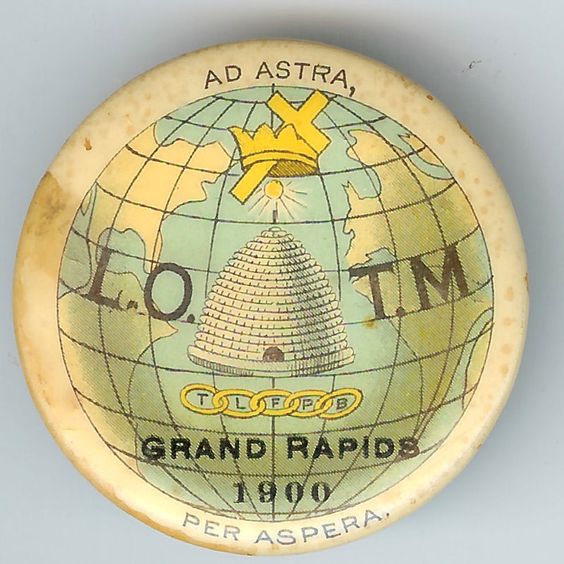 We Are Each Other's Harvest

A Story of Sentiment: Luck at the Races